"The night is dark and full for terrors" 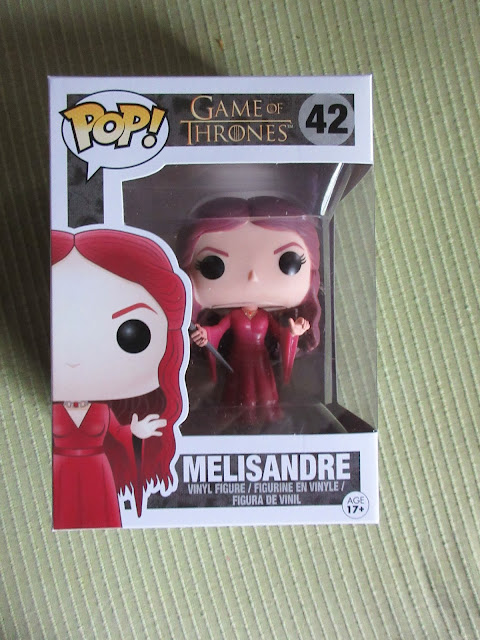 I've gone crazy for these Game of Throne dolls. Because I need
to collect more stuff, right?


My week started off fun. While eating lunch on Monday, one of my fillings fell out. By "fell out", I mean it disappeared. Must have swallowed it! Called my dentist and I'm going in this afternoon. Good thing it hasn't hurt and no ill affects from where ever the filling went.


Oklahoma opens tomorrow, so not a good time for a dental event.

For the past 2 Saturdays I've hit the thrift shops and have  come home with a few items. Sometimes it's a great big barren desert out there.  Other times it's awesome. The beauty for shopping second hand is you never know what you'll find. Half of these finds are from Braganza, which is a rummage sale to benefit the VSU symphony, the other half are store finds. 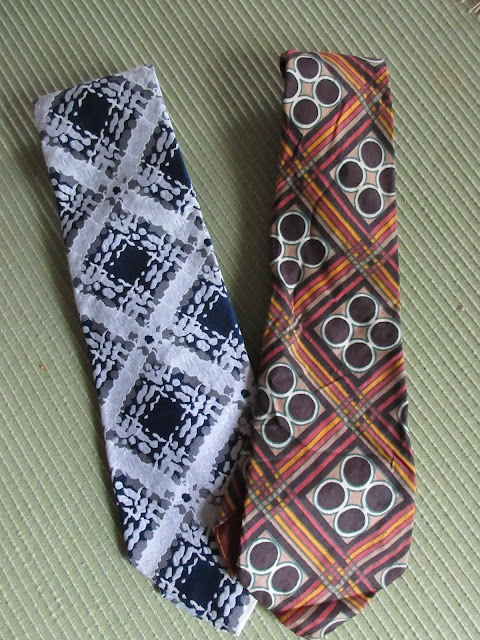 Two ties, the one on the left is vintage. The right one was too cool not to buy. it's silk and made in England. 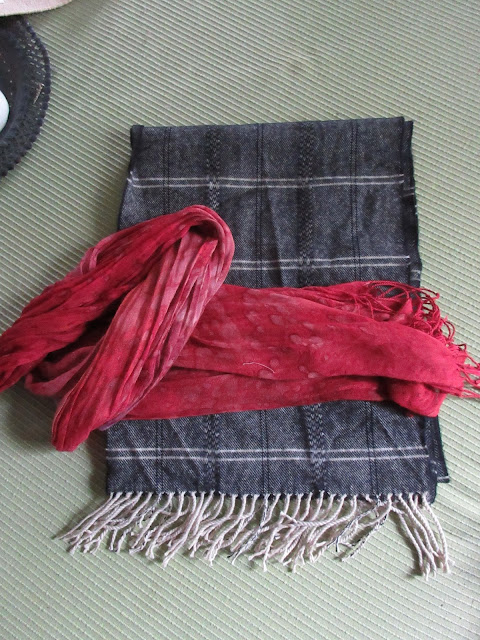 Two scarves. The gray one is cashmere from Scotland, the red a cotton Bo Ho style. 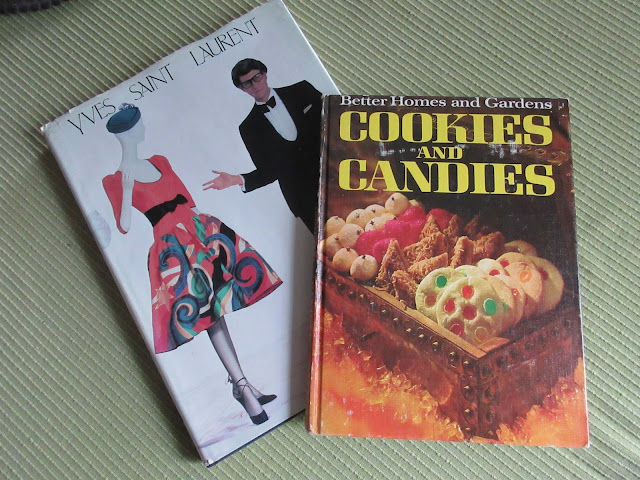 Two books (hey, I spot  trend). The Saint Laurent one is from a Met Museum of Art show, 1983. I can't seem to pass up Better Homes and Gardens vintage cookbooks. This one is from 1966. 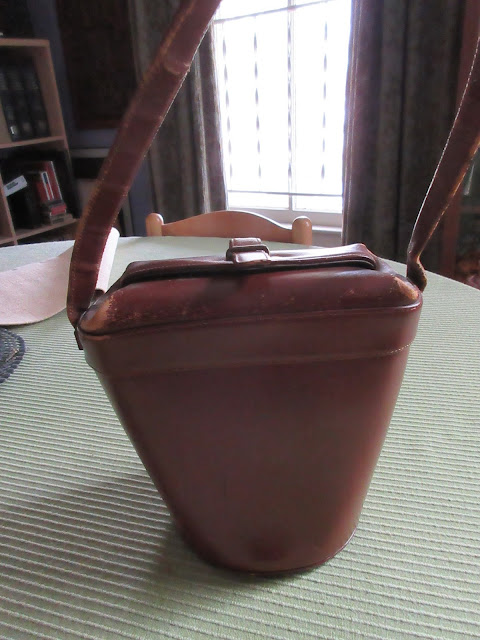 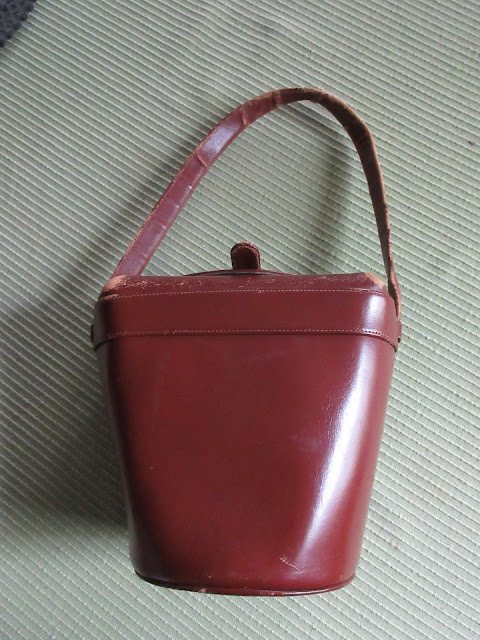 Only one handbag, but two views. At first I thought this was an old camera case. 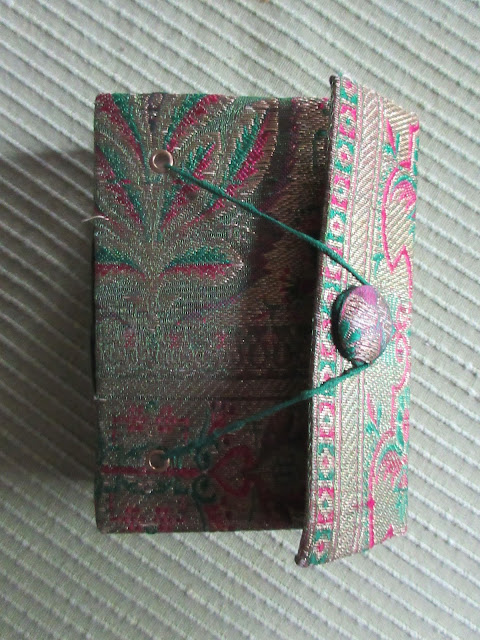 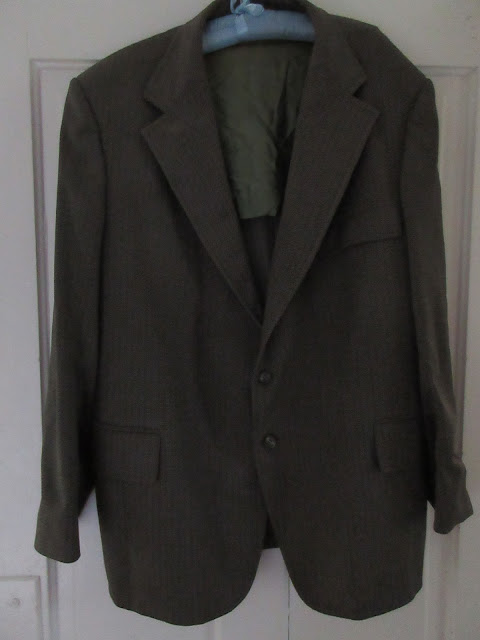 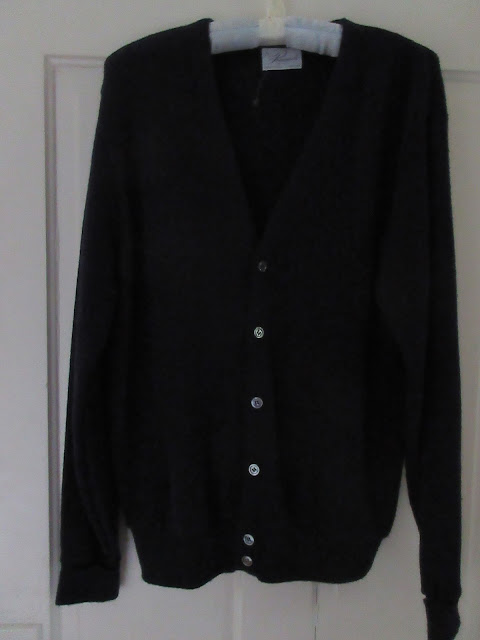 Navy blue cardigan for The Doctor. 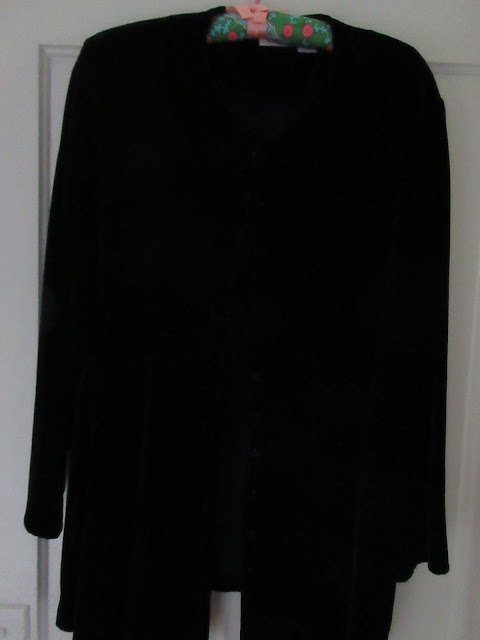 Midnight blue velvet tunic for me. I never can get velvet to look nice in photos.


It's been raining on and off for three days, my fingers are crossed that all the pine pollen was washed away.


If you celebrated Easter,  I hope it was lovely. 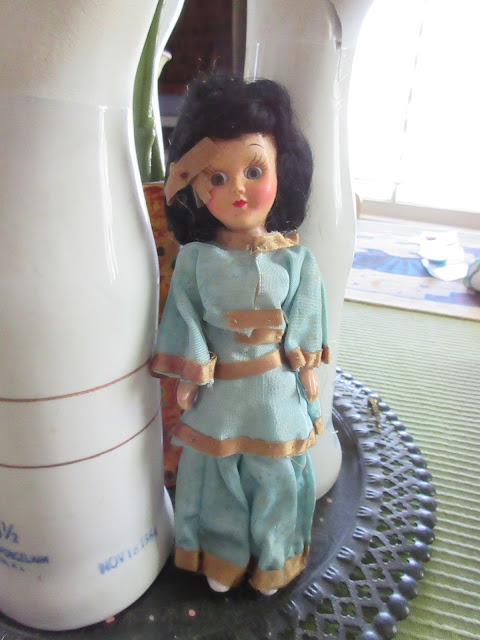 One of the 1940's dolls I got at the last auction. She's dressed in Chinese pajama's.


Spring has sprung all over town. Which means all that pine pollen is worse than last week. I know it's bad when I have to stay indoors. Fingers are crossed that it's almost done.

Speaking of done, we're this close to having Oklahoma finished and done. That show opens in a week. Then we can play with all the hats and shoes from that giant-sized donation.

Spring Break is a hallowed collage tradition in America. A whole week off to "party". I'm taking advantage of a quite building to finish as much of the musical as possible, it's coming up fast.


I wrote that in the pine pollen on the porch. 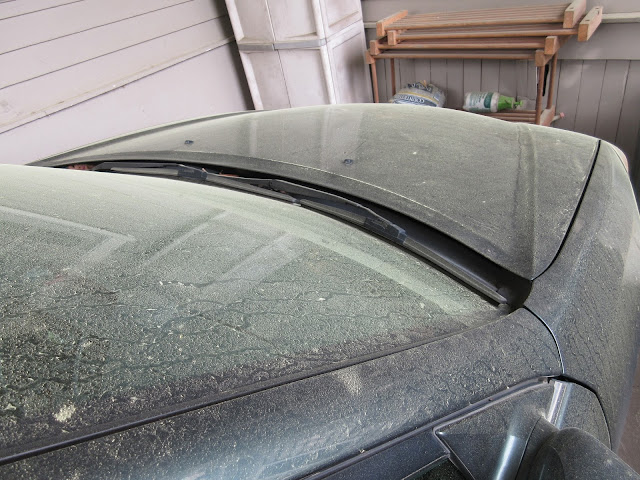 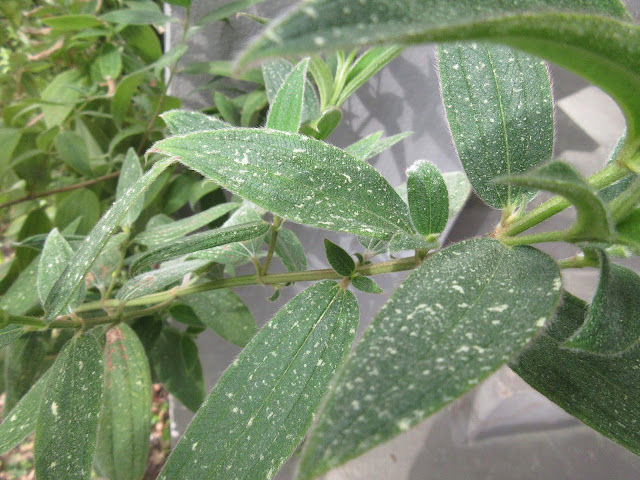 Even the plants are wearing the green. It's everywhere, no wonder I have itchy eyes. 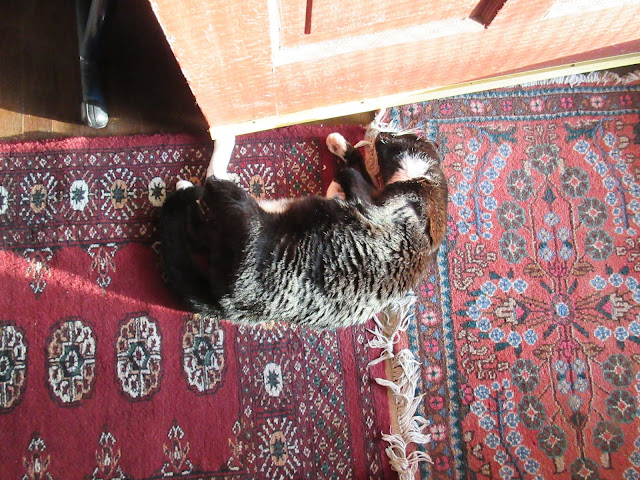 Mr. Scooty was enjoy the sunshine the other evening. 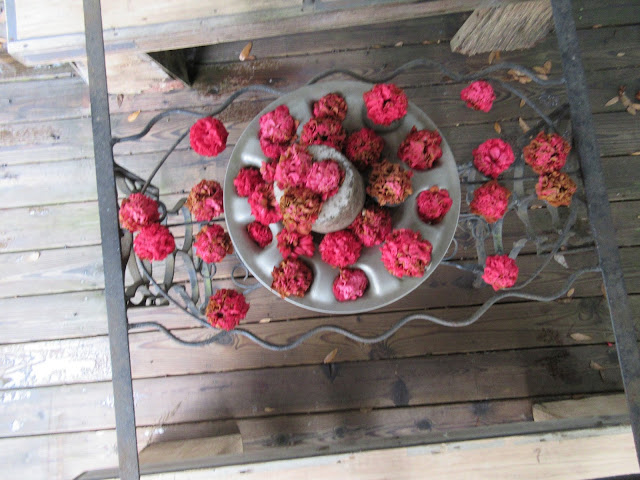 The Doctor made this art project a couple of months ago. First cooking, then art, he'll be wanting to learn to sew next.

Maybe she's Hungarian? If the label is right. 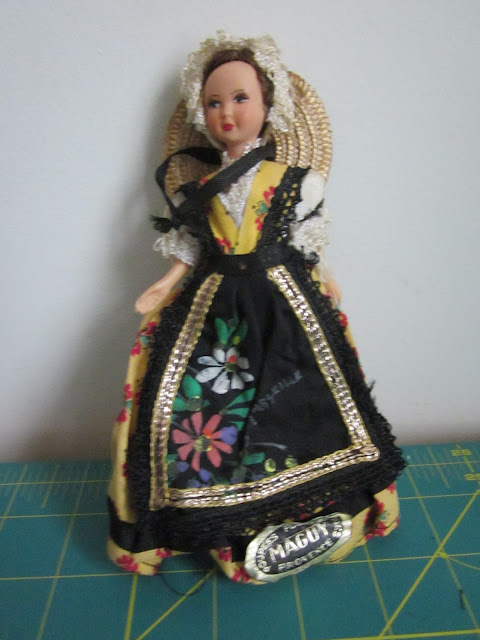 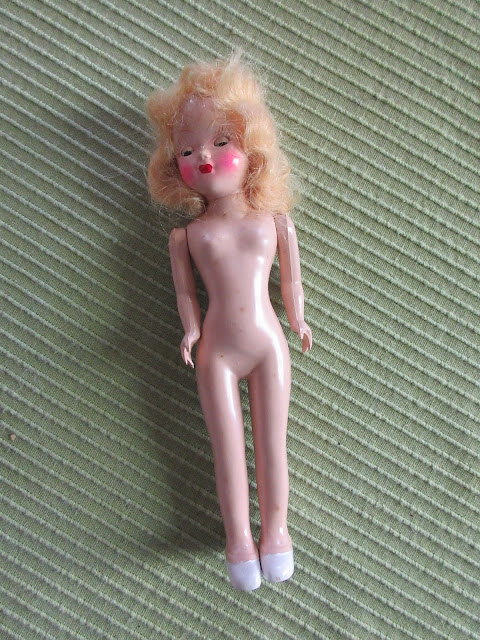 It's not the naked, it those red, red, cheeks. And sleeping in make-up is such a fashion no no. Maybe I should make her some clothes.

TREASURE AT THE AUCTION

When we decided to move (which hasn't happened) I swore off on-line auctions. Downsizing, ya know. That didn't last very long. Here's my latest finds 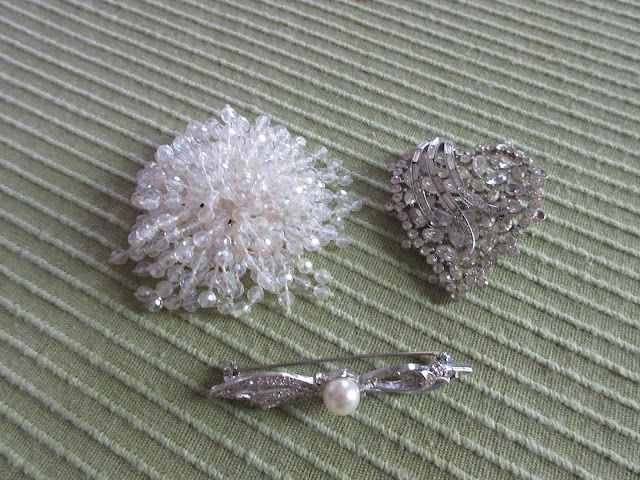 The beaded pin is from West Germany 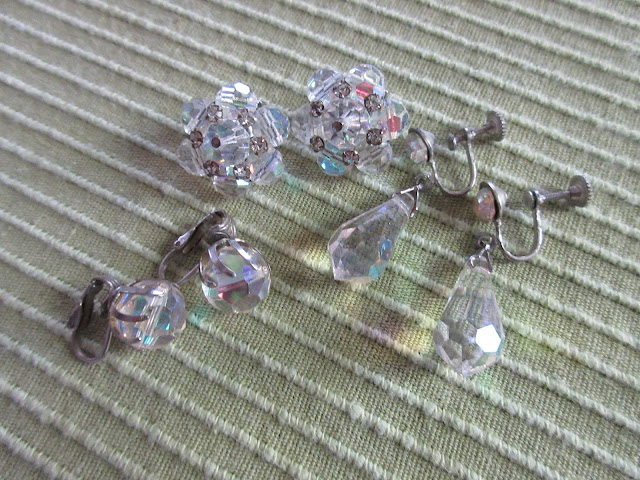 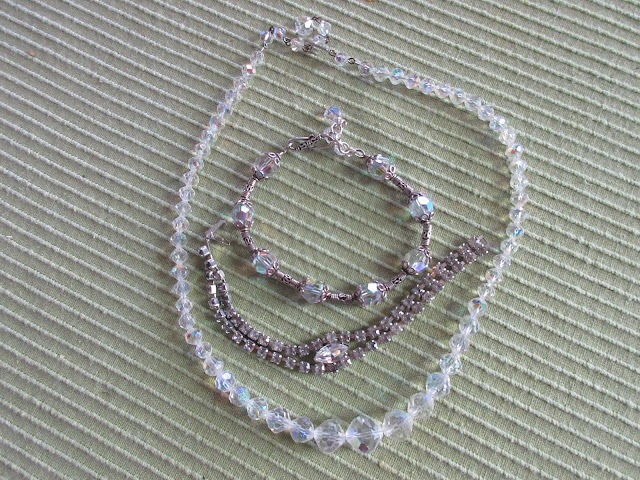 Added to my camera collection. I didn't have one with the flash attachment. 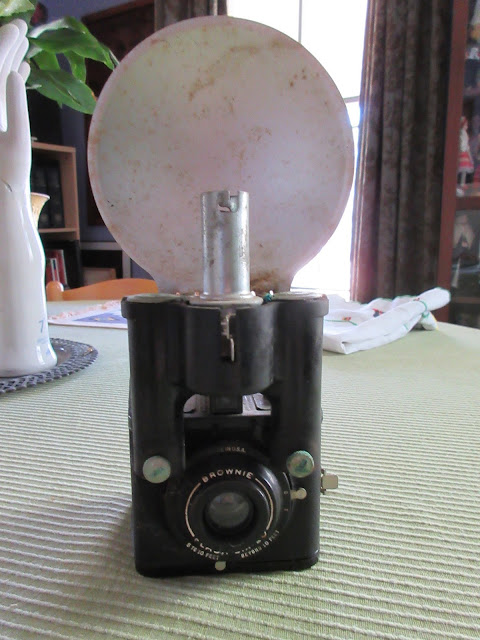 This was listed as "assorted vintage items". It's all sewing items. I waited until the end of the auction and won this for $5. 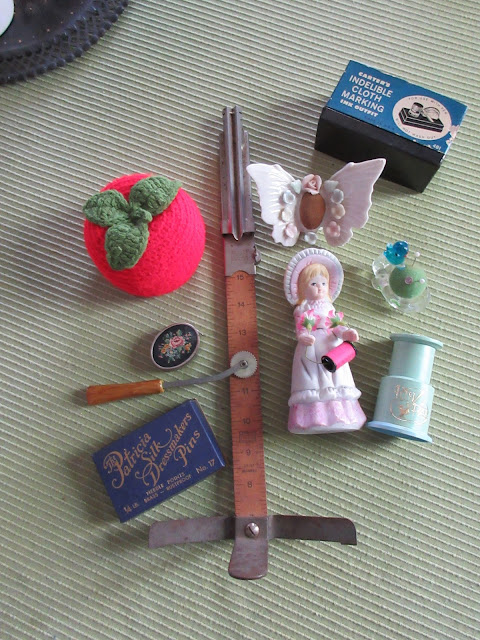 The oval shaped needlepoint item is a tape measure. I need another skirt hemmer (that makes 3), and I've taken the little pincushion to work. It's next to the lady's head and has a bluebird on it. 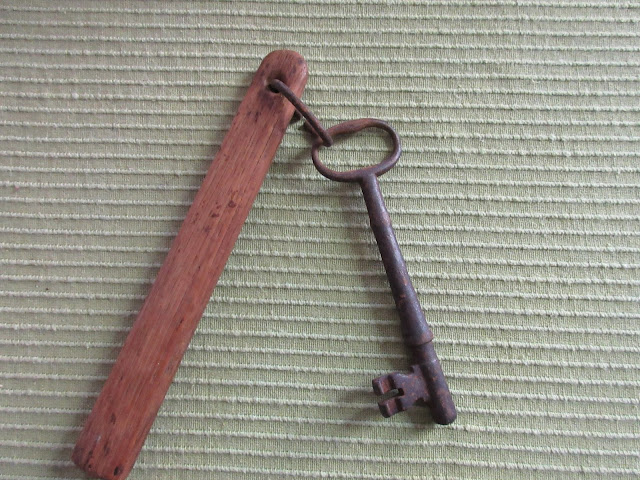 Three vintage suitcases. Can't get the brown one open, yet.  Also got the Doctor an old pair of binoculars, which he put somewhere. And weird dolls. Stay tuned for them. 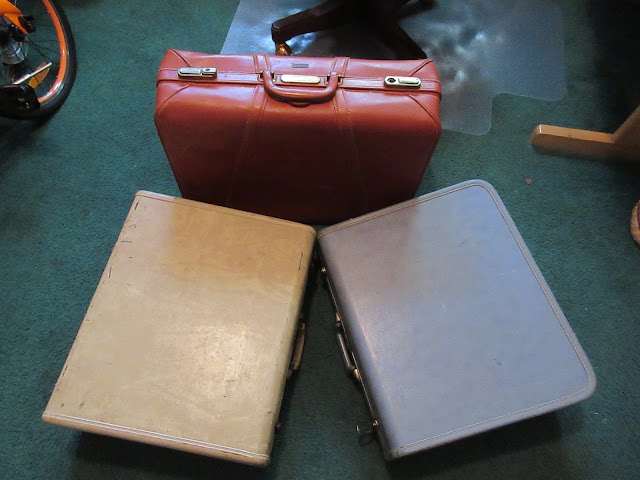 My guess is Dutch. The wooden shoes are a giveaway. And he looks like the Dutch Boy paint can. At least I thinks it's a he. That eye makeup...... 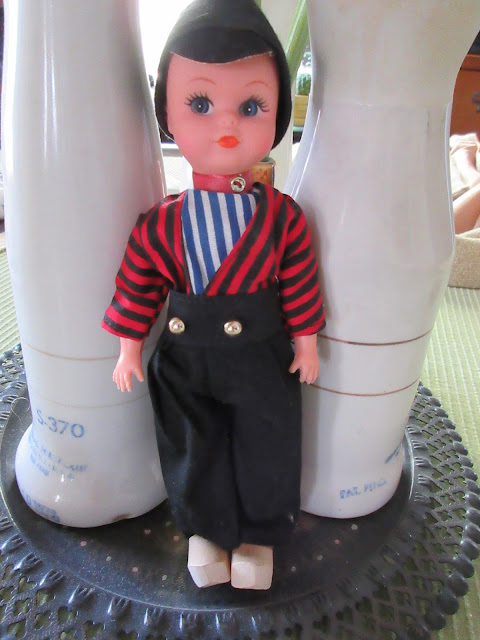 Won a bunch of things at an on-line auction the other day. So much for swearing off doing that. It's my one vice.

Spring must be here, as pollen is fallen and getting all up my nose. At least it's sunny and pleasant, weather wise. Enjoy your day.

Posted by thorne garnet at 7:57 AM No comments:

IT'S SUPER TUESDAY, Y'ALL

Unless you've been living under a rock, you've probably heard that the USA is electing a new President in November. Before that happens, there's something called primaries. That's state elections to pick the top candidate from both parties. We pretty much have 2 parties in this country, Democrats and  Republicans. Today is Super Tuesday, which is when 11 states votes. In Georgia, where I live, you go to your polling place, fill out a form, mark Dem or Rep, go to the voting machine and vote. We also have early voting, which we did a couple of weeks ago.


After all the primaries happen, the parties have conventions to set agendas, platforms, fight about stuff. In November, the general election happens and we get a new President to replace Obama. The new president takes office in January.  The first time I voted was in 1976, 40 years ago. I don't think I've ever missed an election. There's a couple of ways to vote: absentee ballot, if you're going to be out of your voting area on election day, on the day at the polls, or early voting. Georgia has all 3. So, go vote if you live in one of the Super Tuesday states, go vote when the primary happens in your state, and go vote in November.


I promise my blog wont turn into a blog about the election. That would get tired pretty quick.

thorne garnet
georgia, United States
I've worked in theater for over 20 years, I love to make costumes of times gone by. Been a thrift shop fan since childhood, it's like the biggest treasure hunt on the planet! 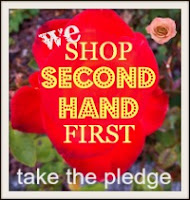 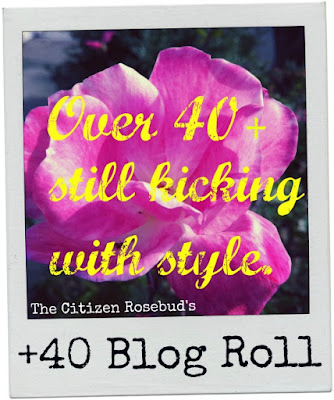